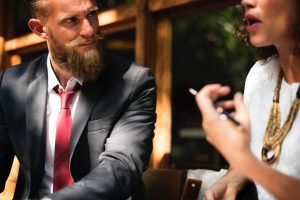 When engaged in a discussion of an issue over which we and another person have a strong and emotional disagreement there is an essential baseline from which to proceed.  That baseline can only be achieved when each states the other’s position to the point where the “opponent” indicates that her or his point of view has been accurately understood.  Then and only then may the debate properly move forward.[1]  It’s a tough but essential standard for people of faith.  The Lord will enable us to learn from “walking in the moccasins” of others but we must learn to temporarily step out of our own moccasins first.

The listening required of us is profound, both in the depth of effort needed and, potentially, in the results.  When sign-bearing protestors scream at each other in the streets or alleged experts stridently interrupt each other in the mass media they betray an emotional intolerance that nearly always results from ignorance.  Comprehensive knowledge about one’s apparent opponent, in practically every[2] type or mode of combat, whether verbal or physical, is priceless.  At best, such insight can lead to a realization that one’s opponent could actually be an ally or someone in need of help; at worst, this knowledge leads to a more carefully calculated and effective strategy.

A helpful lesson may be gained from the English verb “to disarm.”  When we speak “disarmingly” we effectively relieve another person of suspicion or even hostility: we literally remove his or her need to be mentally “armed.”  While “disarming” speech can certainly be manipulative or charming in a crass or even flirtatious sense, what we’re considering here is motivated by a drive to understand such that the opponent can safely let down her guard.  In this connection, our own honesty, candor, and open-mindedness are essential.

[1]It is tragic that you will practically never see this reciprocity in practice in discussions, interviews or “debates” on the broadcast media.

[2]Frankly, I can’t think of a single exception.